Having analyzed the axis from Central Iceland through Hekla and Eyjafjallajökull, it is notable that the shelf surrounding Iceland also follows the same trend.

The edge of the shelf closely follows an elliptical form, centered at the crossings of the continuation of the Reykjanes Ridge and the Hekla NS-axis. The parabola itself is centered around the relevant EW-axis.

Is there a reason for this we can explain? Yes, similar to the explanation about Snæfellsjökull and Snæfell. 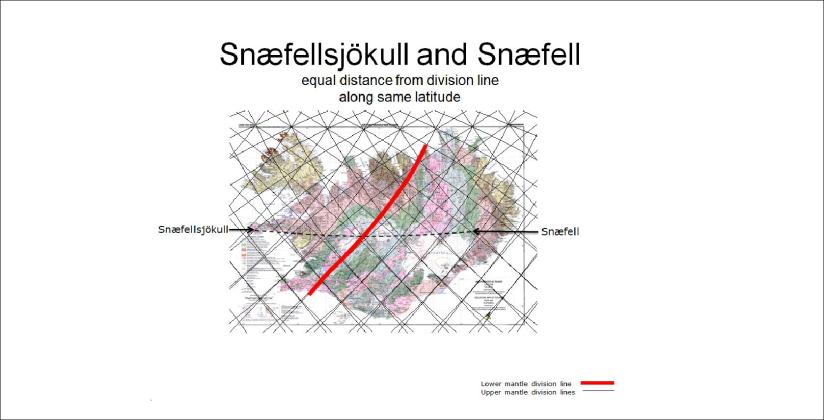 These mountains are equidistant from the same NS-axis as the shelf ellipse. The central point for the two volcanoes is on the division line of the lower mantle and thereby of the downwelling line of upper most mantle. The shelf ellipse central point is the next crossing nort of the main line, namely the extended line from the Reykjanes ridge, which is upwelling closest to the tectonic plate (120 km).

The ellipse is as close to being perfect as possible, having in mind all the complexities that should shape the ocean shelf around Iceland. Also, the fact that the highly elliptical Eyjafjallajökull is shaped around the same NS-axis is a curiosity.

So much to speculate! But the base has been explained with the convection cell model.