Looking at a World Map, a long ridge does decorate the Indian Ocean, called the Ninetyeast Ridge. It simply lies close to 90°E. It is not the only NS feature in the area, because the Chagos Trench is found west of it, forming a parallel. And there is a mystery:

This square is surprisingly regular, besides that the interval between Ninetyeast and Chagos along equator spans 15°. That is half the width of a large convection cell in lower mantle… So why is that? Actually we need one more step of investigation to understand a bit what is going on. There are more NS faults found east of the Ninetyeast Ridge, so they seem to be a part of the same piece in the puzzle.

The Indian Ocean floor Indian Ocean floor drifts to NE, a direction that does not seem to have anything in common with NS. Still, at equator the main division point between convection cells is found at the coast of Sumatra. Therefore this NS framework can be considered as spanning 30° along equator and showing its effect directly southwards due to NS symmetry of the convection currents.

This is therefore the holistic piece. The Central Indian Ridge forms the western edge of the framework. The eastern most suspicious NS lines are found extending from the division point of Sumatra coast of the equator line.

The equator plane is essential for the convection cell system. Therefore I add the division points map here:

Finally, to get a bird’s eye view of the surroundings of Ninetyeast Ridge and the relevant square, let us compare it with the convection cell division line main pattern: 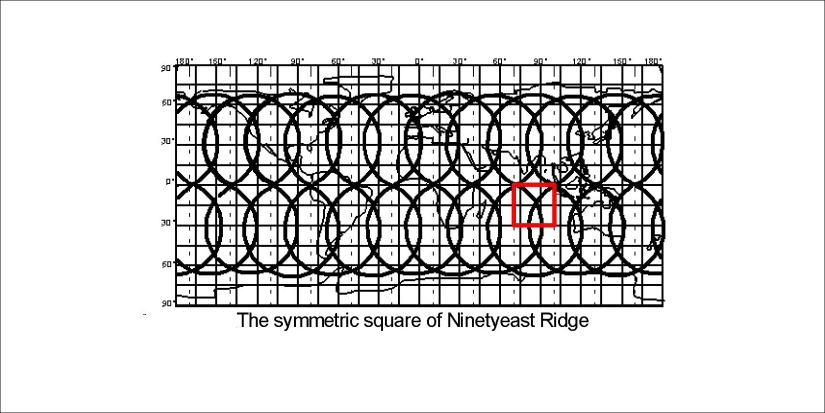 This is the square, spanning 30° along equator.